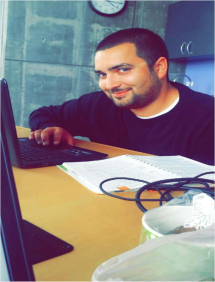 Alejandro Lucero is a 23-year-old creative writing student at Arapahoe Community College where he also works as a tutor at the Writing Center. He expects to graduate in December 2017 with an Associates of Arts. After, he hopes to further his education in English and Creative Writing at Adams State University. He was the recipient of the Writers Studio Literary Contest Scholarship at Arapahoe Community College for the year 2015. His poem “Breathing Karen” and creative nonfiction essay “Lessons from the Woodpile” can be seen in the 2016 Progenitor Art & Literary Journal which is a literary magazine produced by Arapahoe Community College students. He has been living in Littleton, Colorado, for the past six years and has been at ACC for the past two. He was originally born in Las Vegas, New Mexico, and raised in the beautiful mountainous area a few miles out of town. The rural landscape of his childhood home is one of the biggest inspirations for imagery and symbolism in his writing. Alejandro gets his Polish, Norwegian, and Irish ancestry from his late mother, and his Native American and Latino ancestry from his late father. He truly believes in the beauty of interracial relationships as he, unashamedly, thinks very highly of his own appearance.

John Patsynski currently teaches English Composition (sometimes with an attached Reading/Writing Studio class) to a diverse student population at The Community College of Aurora. He’s also a freelance editor and tutor.
As a teacher, I feel if I am not learning, I am not properly a teacher. My favorite aspect of teaching is being in the room hashing it out. I like the performative, engagement aspects of it. This is also why I need to start the poetry workshop at Prodigy; I find I feel better when I’m engaged in the discourse–it invigorates.
I live in Congress Park & have for over a decade.
I have a cat named Eigner.
I have too many books and records.
I collect other things: Robots (especially R2D2); Spaceships (Millennium Falcon, Serenity, TARDIS),
dragons, owls, unicorns (I’m particularly fond of zombie unicorns); LEGO; dice.
I love movies.
Favorite Film: Casablanca (endlessly watchable & historically significant)
Favorite Director: David Lynch
Favorite Poet: Michael Palmer
Favorite Philosopher: Gilles Deleuze
Favorite Books: OED, Ulysses, Notes For Echo Lake, Babel-17, The Sonnets, Eros the Bittersweet, Philosophical Investigations